The Caves of Lacave - @ Dominique Viet

Going Underground - The Caves of Lacave

A spectacular cave with an underground train ride to boot…

Experience the thrill of taking an electric train into the heart of a cave. Then follow a guided tour of the 12 magnificent underground chambers full of striking limestone rock formations and rock pools. Open since 1905 this Dordogne Valley highlight is easily accessible, only 10 km from Rocamadour. 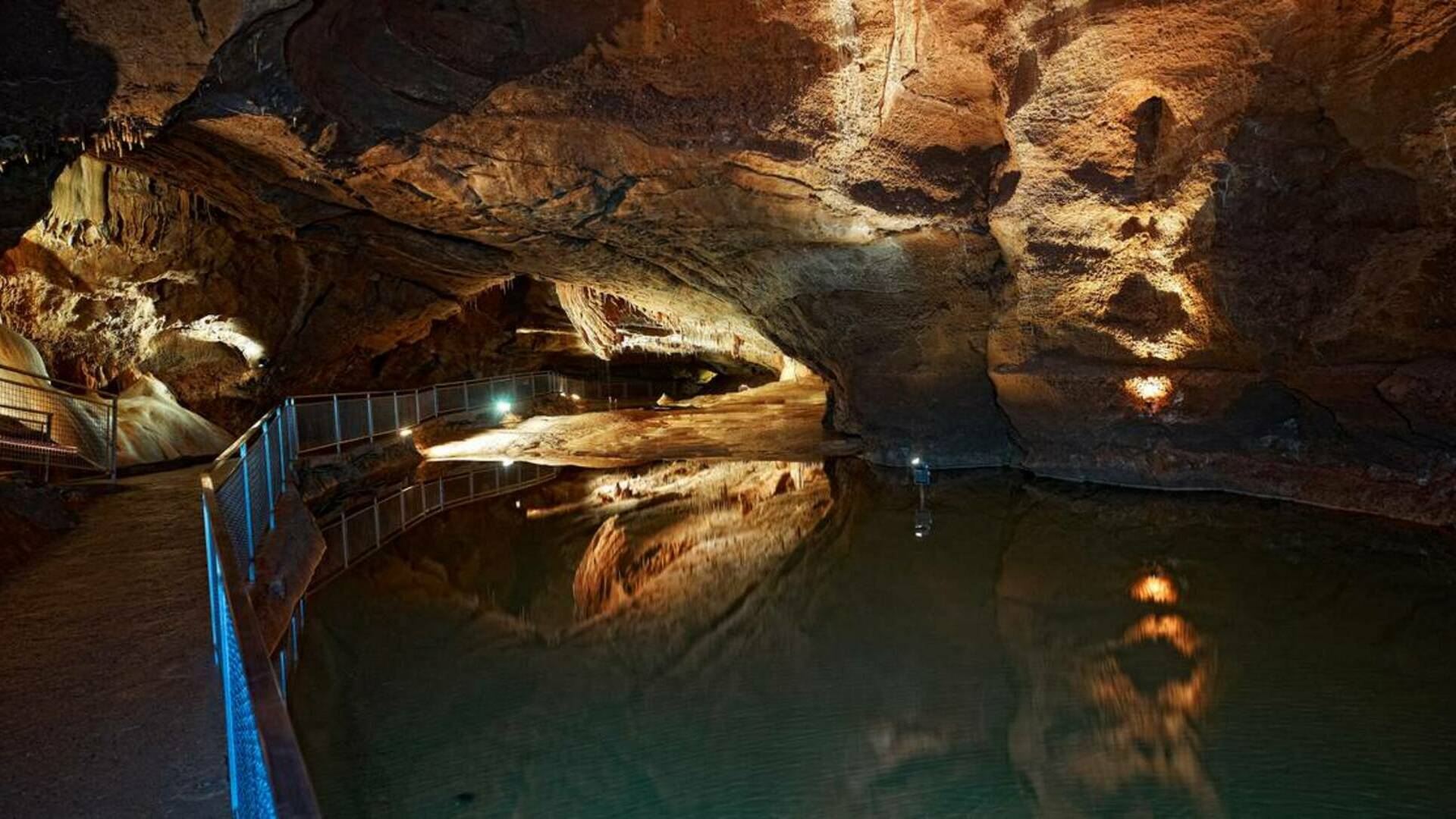 Situated 10 km from Rocamadour on the banks of the Dordogne River, Lacave is a tiny village with big attractions. A Michelin star restaurant, a castle on a cliff, a prehistoric park, wild beaches…but most of all it is famous for its underground treasure: the caves of Lacave. Discovered accidentally in 1905 by a speleologist called Armand Viré, the caves have welcomed more than 7 million visitors since its opening over 110 years ago.

You can’t help but marvel at Mother Nature’s exceptional subterranean gem full of a strange other worldly beauty, stalagmites, stalactites and other natural limestone rock formations.
Open from February until November with an exceptional opening around Christmas time each year.

The adventure begins with a difference. You descend by going up, taking a one of a kind ride on an underground electric train which takes you into the heart of the grotte. Then taking stairs (or a lift) you start the one and a half hour tour of this limestone cave network.
With an ambient temperature of between 13-14 degrees bring a light cardigan or jumper if you feel the cold. What awaits you are a series of 12 different caves (1.6 km long) interlinked by small passageways.

It took thousands of years to create the amazing rock formations. When rain water drips into the caves, it leaves behind traces of calcite, one of the major building blocks of limestone. So every day and imperceptibly, the calcite changes the shape of the rock formations in the cave. There are impressive stalagmites and stalactites and natural rock pools throughout.

The fantastic lighting really brings to life the beauty of these formations. There is a perfectly lit mirror reflection of the cave in an underground natural rock pool. In another cavern lit entirely by ultra-violet light, the cave is made phosphorescent so that it glows spectacularly. These impressive lighting effects make the visit a must see and the whole tour takes around one and a half hours.

Most guided tours are conducted in French but headsets are available in various languages (including English) and some of the human guides are multi-lingual. 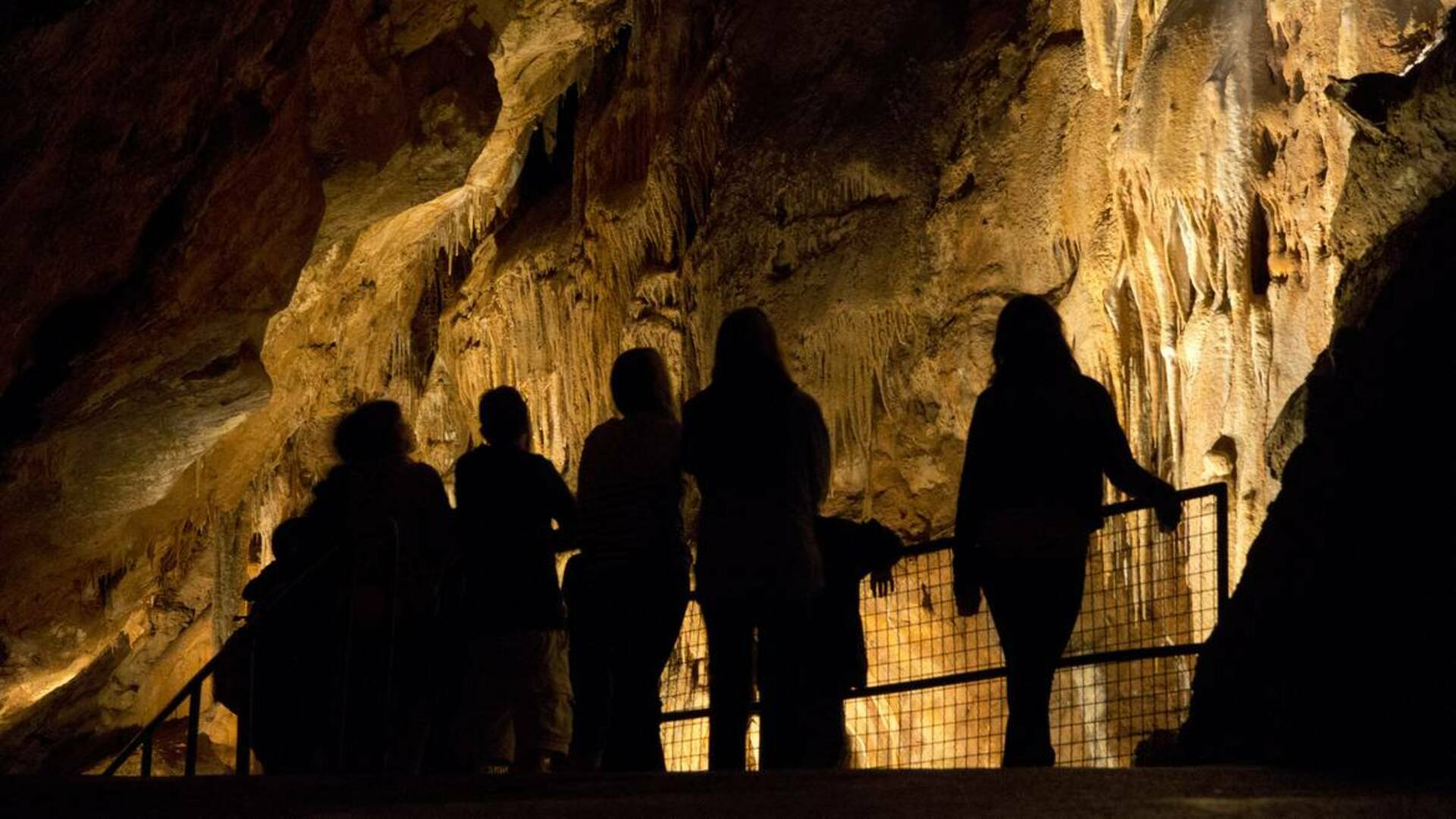 Family at the cave

In 1905 Armand Viré was lowered into a natural well, 6 meters in diameter and 75 meters deep. At the bottom he discovered a network of caves over 600 meters in length.

Dazzled by the beauty of his discovery, he decided to open it to the public. But the existing entrance wasn’t easily accessible and he had to find another way in. He followed the underground stream to the current entrance of the caves, bought the piece of land and started digging into the hill. A year later, using  pickaxes and dynamite, he had dug a 520m  tunnel. Finally one day he reached a cave but was amazed to see that it wasn’t the cave he had originally explored. This was an entirely different network, even more beautiful than his first discovery. Very soon afterwards, the caves of Lacave opened to the public. 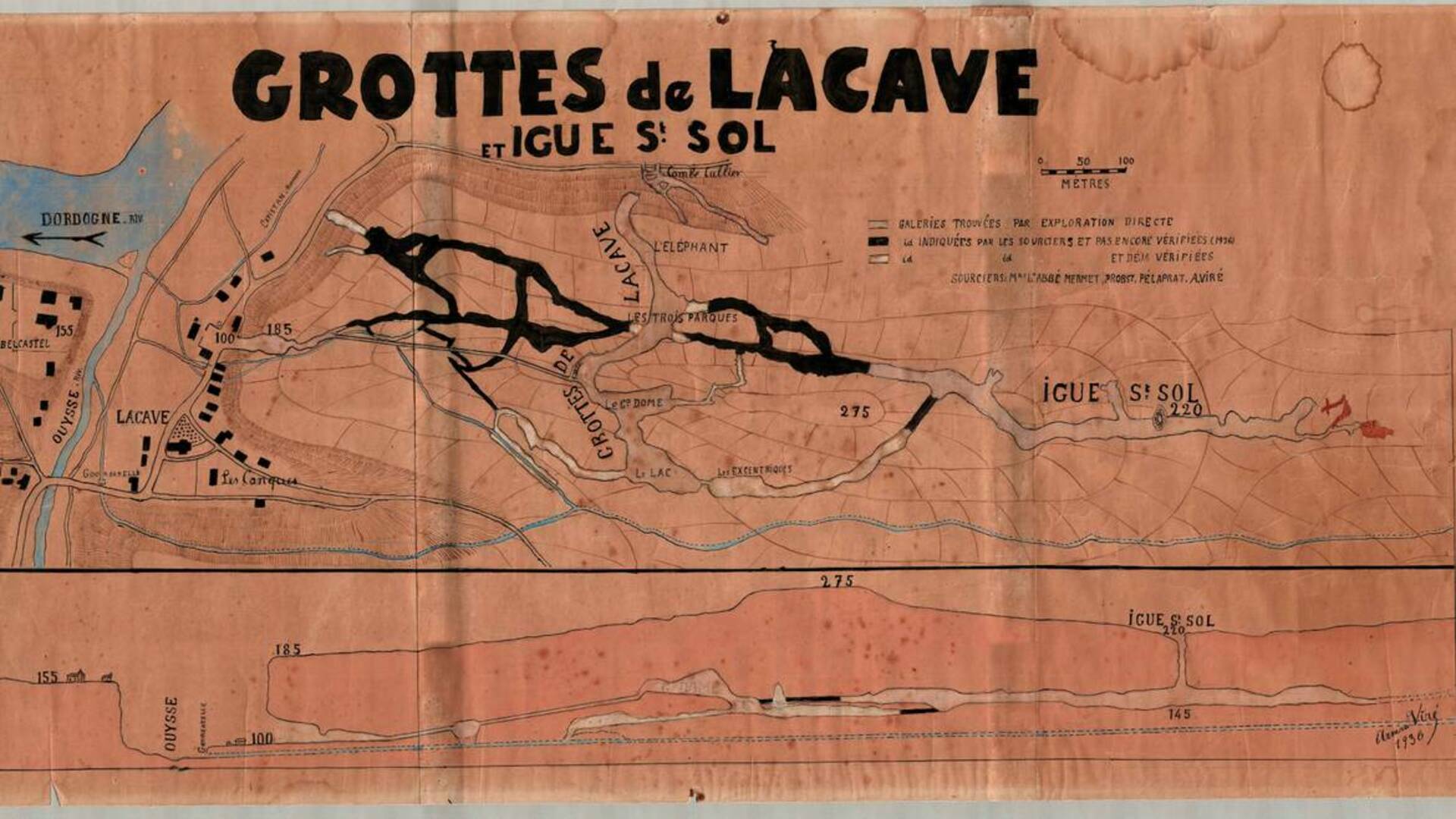 Map of the caves

Jazz in a Cave

Every year, as part of its association with the Souillac en Jazz festival, the Grottes de Lacave play host to a truly unique and unmissable experience for all jazz fans. Once a year (every third week in July) you can listen live to a one off concert as the Jazz rhythms bounce off the magnificent acoustics of the limestone rock. Spaces are extremely limited and tickets always sell out fast- so don’t dilly dally dadyo.