Canoeing on the Dordogne -

In 2012, the Dordogne river basin was recognized by UNESCO for its outstanding setting and natural heritage and added to the World Network of Biosphere Reserves.

Rising in the Massif du Sancy in Auvergne and emptying into the Gironde estuary near Bordeaux, the Dordogne crosses much of south-west France in a westerly direction.

It is on the verdant flanks of the Sancy that two streams named the Dore and the Dogne tumble down the steep hillsides to merge and form the mighty Dordogne. Its name also evolved from the ancient pre-Celtic term 'Duranius' meaning water and is one of the few rivers in the world to exhibit a tidal bore.

Once a bustling commercial axe for the valley, the river was the most direct and safest way of circulating goods. It also served to connect populations living higher up the river in Auvergne and Limousin with those lower down in Bergerac and Bordeaux.

​Although the Dordogne's river trade and use of gabares soared in the 18th and 19th centuries, these traditional flat-bottomed boats were operated as early as the Middle Ages. The boats would transport materials like wood and slate as well as salt and wine produced in nearby vineyards.
It would typically take around six days to descend the river between Argentat and Bordeaux , navigating through Beaulieu, Souillac, Beynac, Bergerac...and over two weeks to return upstream with animals (or men) often pulling the boats with ropes from the river banks.

Today, tourists can embark on replicas for an hour-long cruise at various places along the river, including Argentat and Beaulieu-sur-Dordogne.
For booking and information please contact the Tourist Office on +33 5 65 33 22 00. 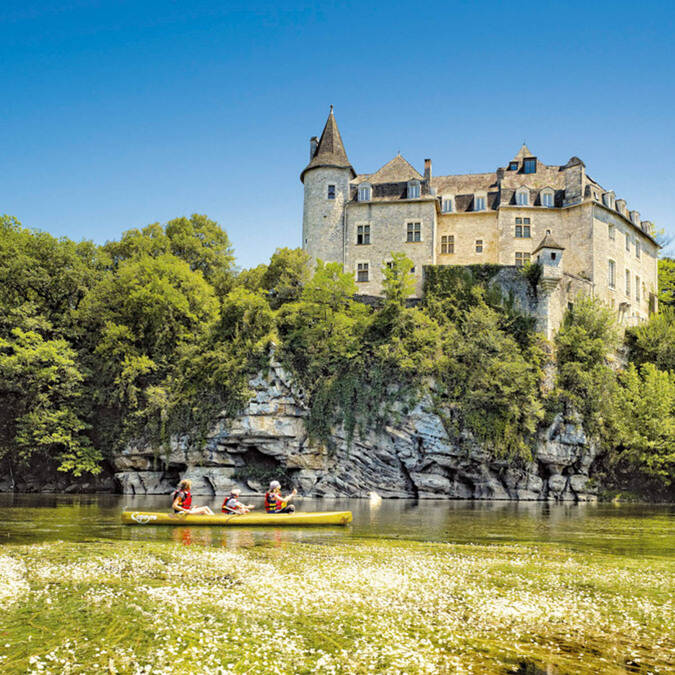 The scenic route along the Dordogne

Measuring 483 km in length, the river changes completely in character during its voyage to the sea but keeps one very important characteristic: The stunning villages, castles and countryside to be discovered nearby. As the region has never been heavily industrialized, its wealth of unspoiled countryside and beautifully-preserved towns and villages is greater than most other areas in France.

The upper valley of the Dordogne includes a stunning series of deep wooded gorges. Its steep cliffs, fast flowing water and high bridges attract many a walker, driver and canoeist. In several places the river is dammed to form long, deep lakes like Bort-les-Orgues.

Past Bort, it is dammed another four more times before arriving at the charming riverside town of Argentat with its medieval houses, quayside restaurants and fantastic post-lunch strolls. 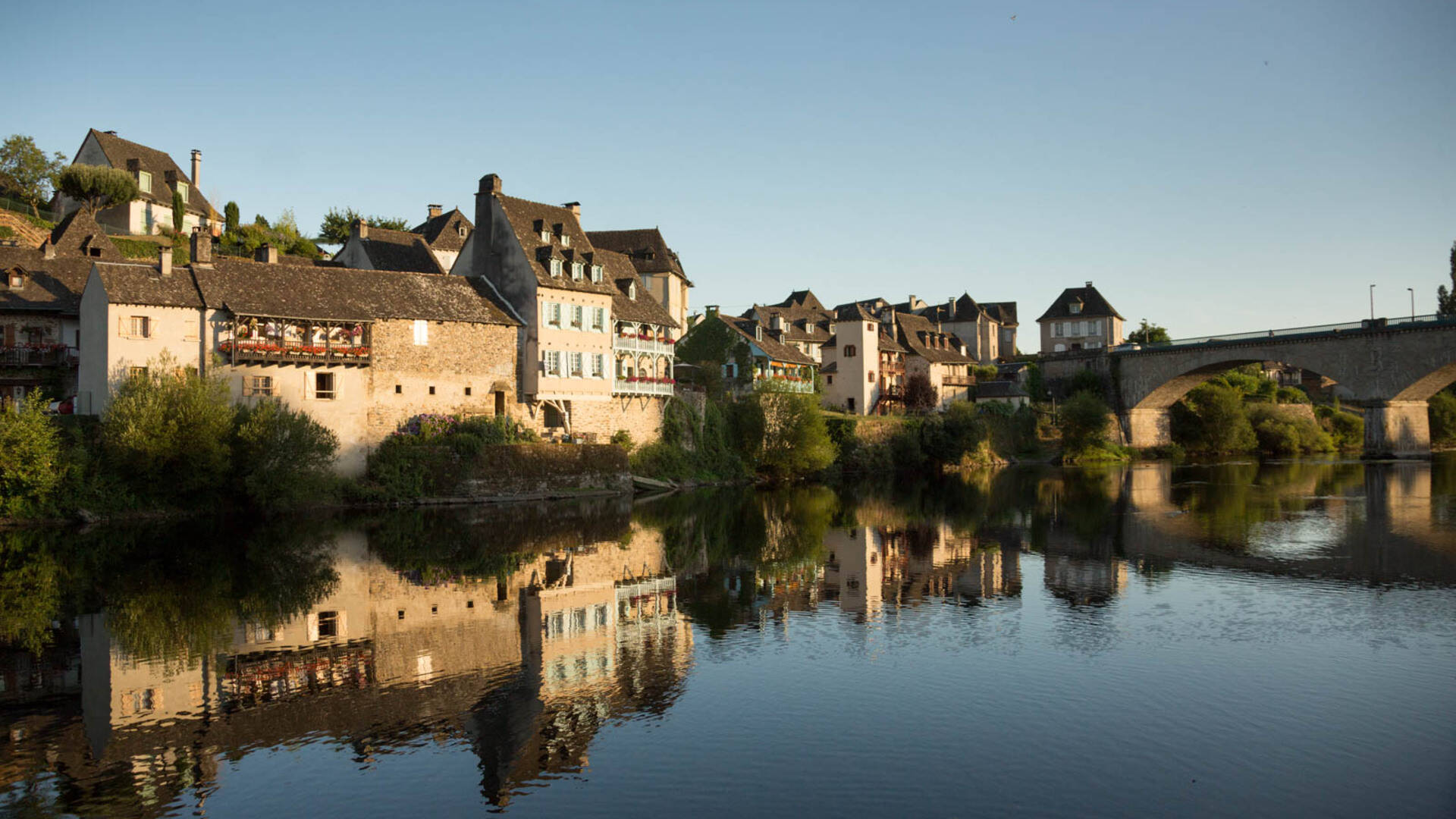 An ever changing landscape

The journey between Argentat and Beaulieu-sur-Dordogne will take you through a bucolic landscape of green pastures and walnut orchards. The valley here widens to accommodate the fertile flood plains that rise towards the wooded hills.

Before Carennac, the Dordogne winds its way peacefully towards the Cère and the Bave that flow in on the left bank. The river frequently splits into channels creating verdant islands that are a joy to pass by. Soon enough, the first limestone cliffs begin to appear, alternating with lush green landscapes and castles that are either perched high above or carved into the cliffs. 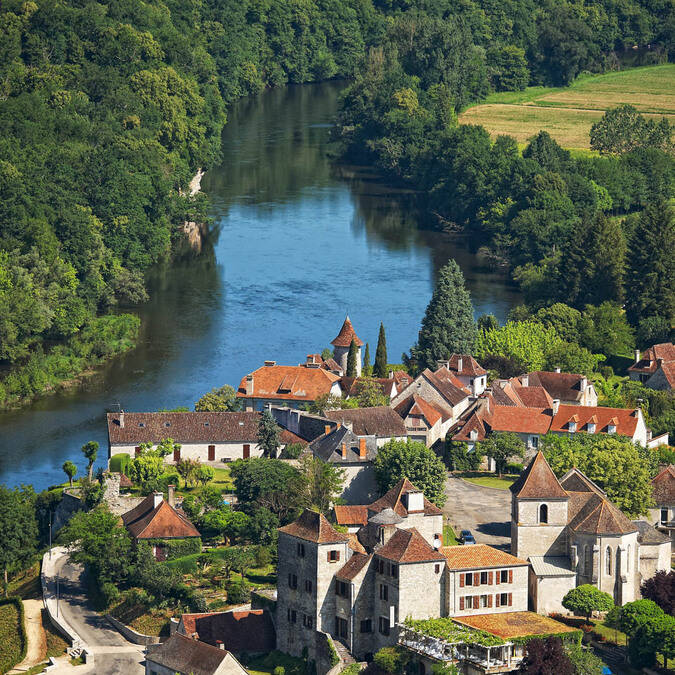 The stretch between Saint-Sozy and Souillac flows past (or below) three gorgeous châteaux: Lanzac, Belcastel and La Treyne. Plenty of beaches like those in Meyronne or Gluges often entice passers-by with their calm waters and vertiginous cliffs to stop off for a picnic or a snooze under the sun.

Higher up the valley, the river runs faster through the gorges and is ideal for experienced or daredevil canoeists. However the river widens and the current eases in this section, making it much more suitable for first-timers, families and photographers looking for the perfect shot of provincial France.

At Souillac, the river begins to wind round in s-shaped loops before being greeted by medieval fortresses and fantastic quayside villages sprinkled with cafés and restaurants like La Roque Gageac and Beynac-et-Cazenac.

The crowds fall behind past Château de Beynac and although the cloud-topping sights become fewer, the scenery remains just as gorgeous. If you can make it to Limeuil, the confluence of the Dordogne and Vézère offers great views of the two beautifully meandering across the floodplains in different directions.

As the river enters the Gironde region, it receives the Isle at Libourne before flowing north-west to join the Garonne.

The Dordogne offers plenty of water-based activities including swimming, fishing and dozens of different water sports. The river is one of the cleanest in Europe and offers reliably warm water especially in July and August. Much as a dip in the pool is nice and refreshing, nothing beats a swim in the sparkling waters of the Dordogne. With some supervised river beaches disposing of a carpark and/or bar, the wilder beaches and creeks offer no more than pebbled creeks and ferny caves to swim into and explore...

Fishing in the Dordogne

The Dordogne is one of most renowned areas for angling in France and is very sought-after by both locals and visitors. Home to grayling, pike, salmon, trout, shad and zander (although fishing for salmon is prohibited), the river is particularly good for fly fishing. It's important to note that a permit is required to fish on the Dordogne unless you book through a private company whereby licenses are usually included. Most tourist offices and some newsagents will have them for sale. 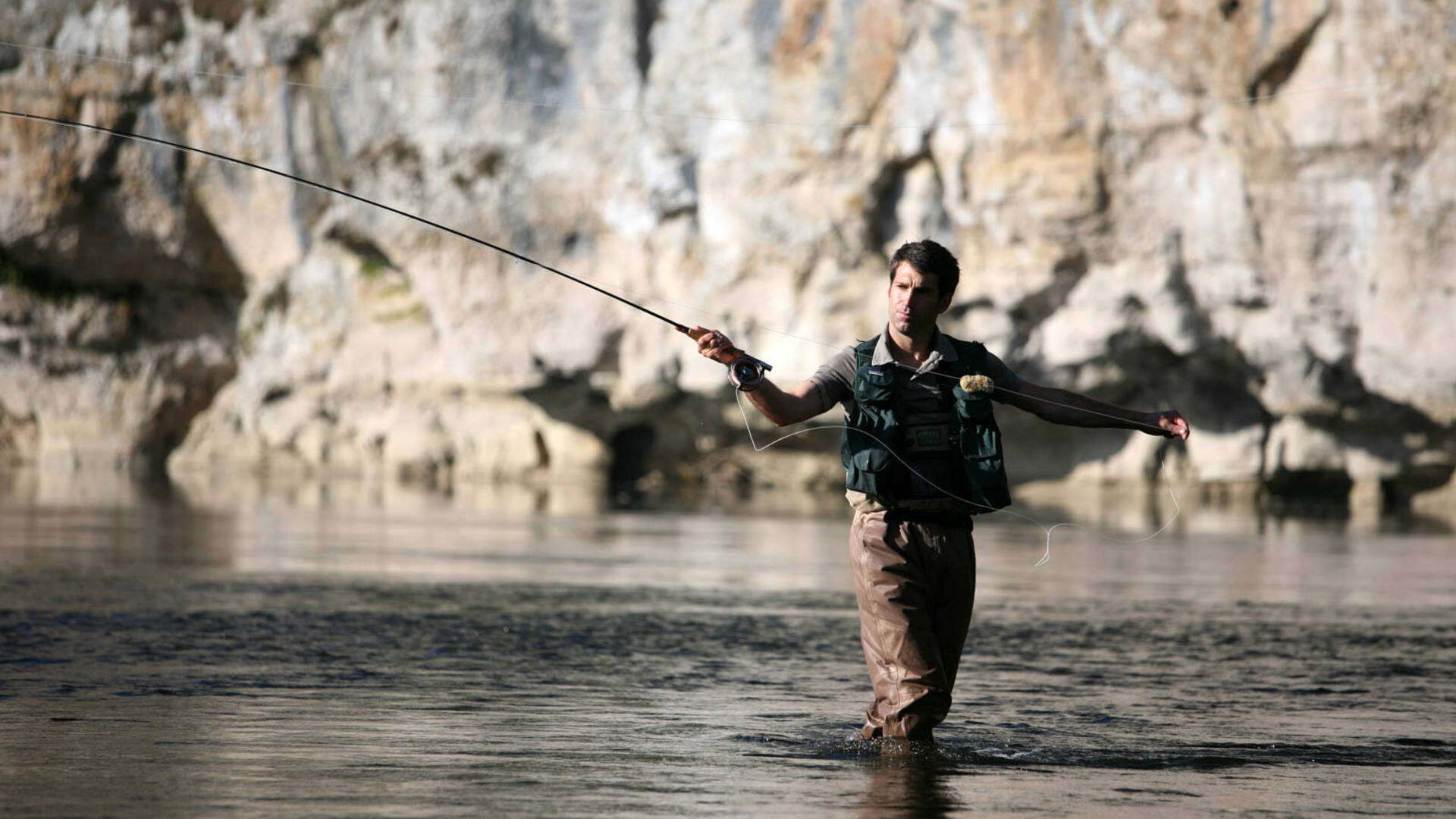 Fly-fishing in the Dordogne

Although the river is navigable along the last 112 miles of its course, commercial traffic on the Dordogne is light which makes it a great place to practice water sports.
Canoeing and kayaking the river is the best way to admire the region's fairy-tale like countryside and some of the quieter sections of the river that are otherwise inaccessible. Stock up with some local specialities and stop off for a picnic along the banks of the river.

Stand-up paddle, water skiing, sailing are also available with many rental companies situated along the water. Rafting is also possible in Carennac.