La Roque-Gageac on the Dordogne River -

From Prehistoric Cliff Dwellings to a Bustling 18th Century Port

In a centuries-old town where little seems to have changed since the Middle Ages, La Roque-Gageac is a true print-it-off-and-pop-it-in-a-frame kind of village. Stroll around the picturesque houses, admire the stunning views and enjoy the lush microclimate in this little piece of Perigordian Heaven.

Situated at the foot of a towering limestone cliff along the banks of the Dordogne, La Roque-Gageac offers visitors a labyrinth of cobbled streets, a troglodyte fort and a Romanesque church that dominates the valley. Listed as one the most beautiful villages in France, it is arguably one of the most photogenic in South-West France.
Fringed with ocher facades and Lauzé roofs, nearly all of its routes lead passers-by to a magnificent view over the river. 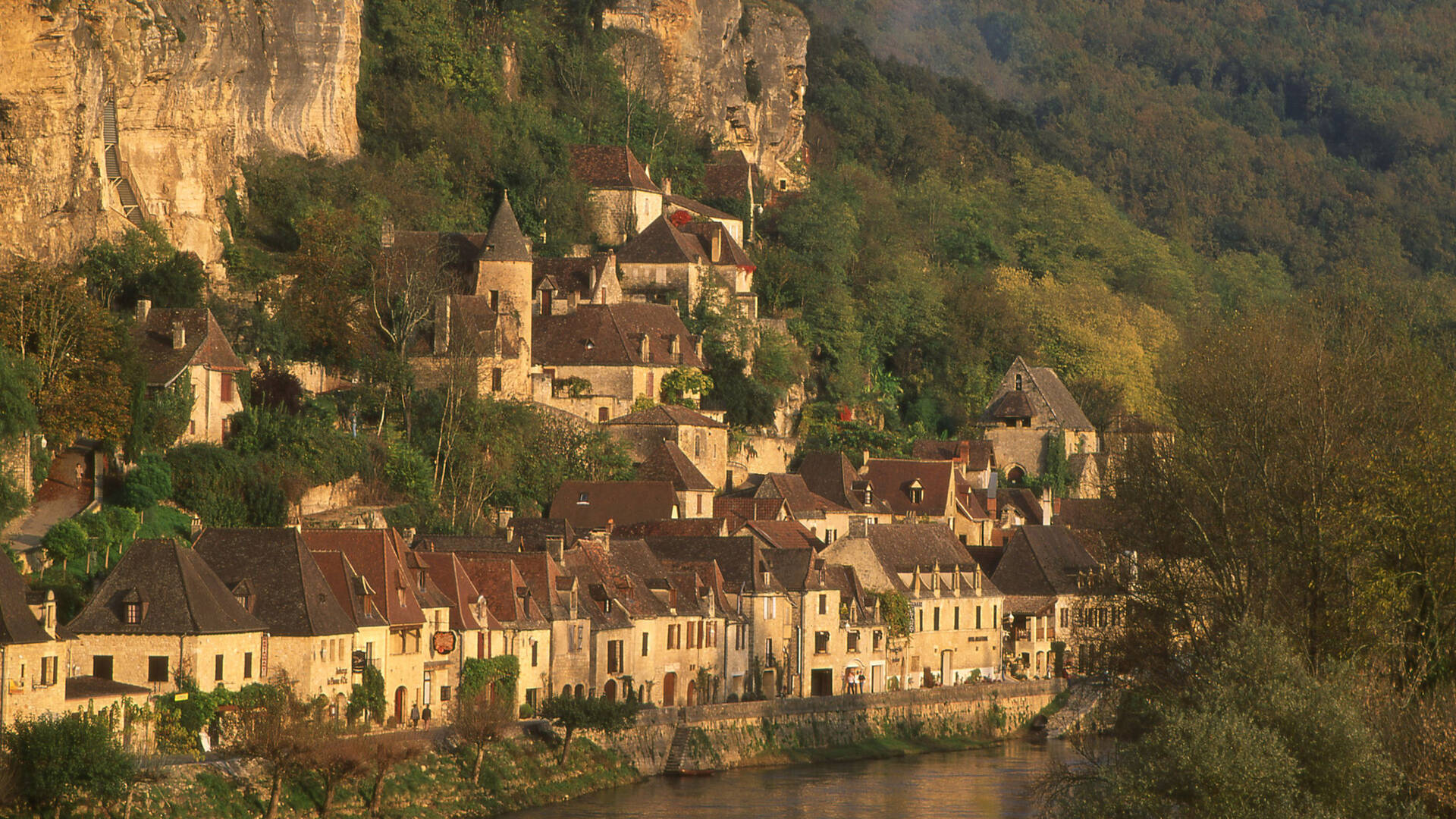 La Roque-Gageac in the evening sun

Occupied in prehistoric times, the cave dwellings anchored high into the cliff were fortified in the Middle Ages for defense during war. The village also underwent transformation with the construction of both modest cottages and elaborate residences belonging to the gentry.
Although most of the properties are in good shape nowadays, two of La Roque Gageac's landmarks really stand out: The first is Manoir de la Tarde with its circular tower and mullioned windows, the second is Château de la Malartrie, a 19th century Renaissance imitation that sits on the far left of the village.
Since the 1970's, the small church stands mid-cliff in an exotic garden of palms, cactus, bamboo, banana plants and fig trees which flourish thanks to the village's south-facing position, sheltered by the cliff from northern winds.
From here, visitors can marvel at the superb panorama over the river which is most usually dotted with either swimmers, canoes or gabarres.

A journey on the river

The crème de la crème of any trip to La Roque Gageac is taking a ride on a 'gabarre'. Once a bustling river port, the village was one of the Dordogne Valley's most important trading points where flat-bottomed boats would be used to transport goods like wood, wine or salt to other regions in France.
Today, tourists can embark on replicas for an hour-long cruise at various places along the river. La Roque-Gageac is a great starting point, allowing visitors to get an eyeful of the gorgeous subtropical village from the water as well as sail past sky-scraping attractions like Château de Castelnaud, Chateau de Beynac and the Gardens of Marqueyssac. Each boat has a French guide explaining the history of the Dordogne's river trade and the stunning sights (free audioguides in English are provided). It's advised to book tickets in advance during peak season.

If you're thinking of making a visit to La Roque-Gageac, try and arrive late afternoon when the crowds have eased off and a few parking spaces have been freed. The honey-coloured walls glowing in the early evening sun will be the reward for having to wait all day.