An infinite number of cliff dwellings and caves trimmed with extraordinary concretions and       prehistoric drawings...The Dordogne Valley boasts the most amazing natural heritage.

Everyone from Julius Caesar to the Cro-Magnons have passed through (or under) the lush countryside of the Dordogne Valley. Now it's your turn to explore the hidden treasures that 40,000 years of history has awarded 21st century Dordogne.

Hop on a train and journey into the Grottes de Lacave's jaw-dropping subterranean network of galleries and caverns where thousands of calcified icicles cascade from every corner.
Although each of the cave's 12 underground chambers boast shimmering pools and concretions of all shapes and sizes, the Hall of Wonders is by far the most extraordinary with its 2000m2 show of phosphorescent stalactites and stalagmites... 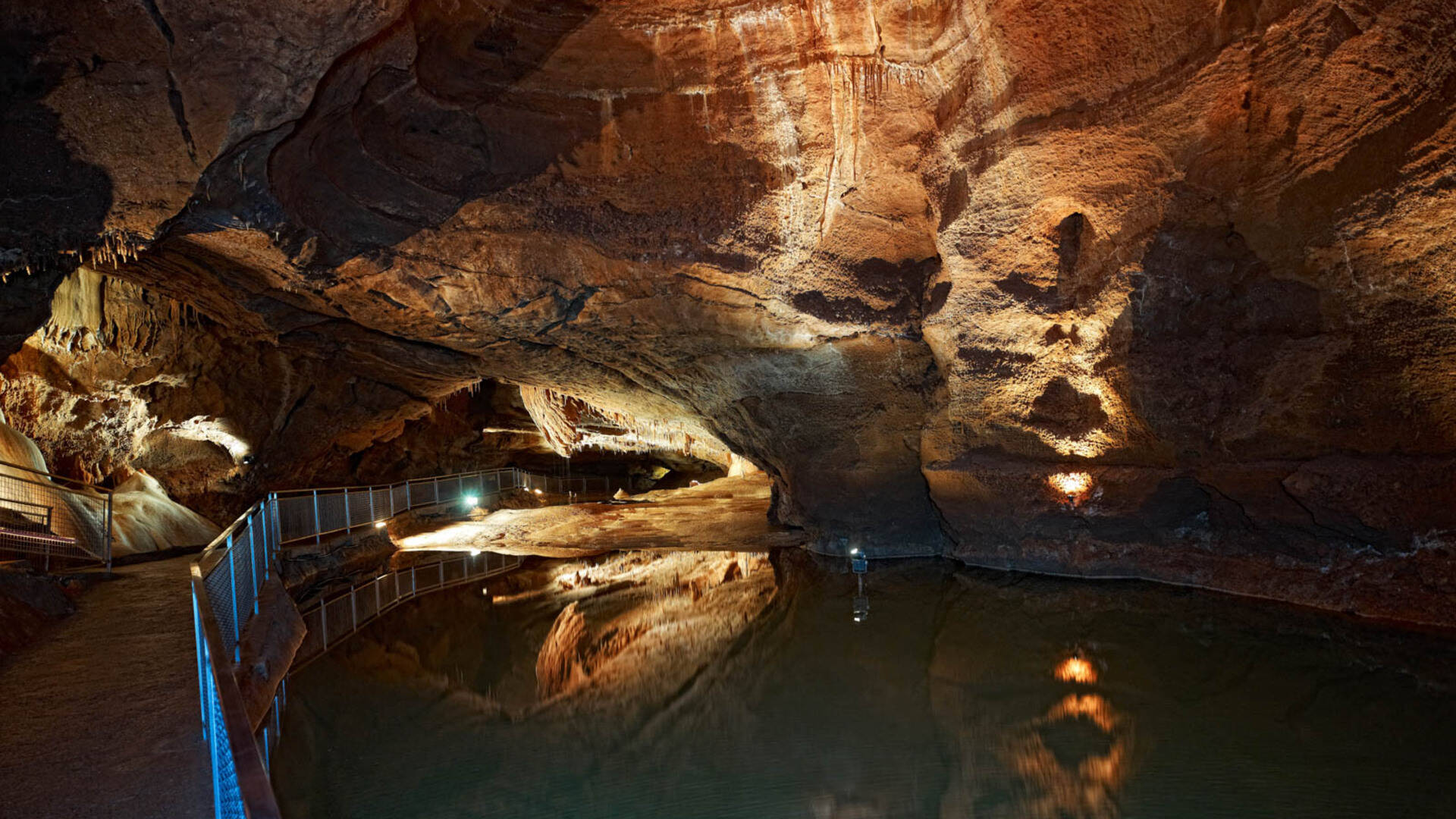 Topping the charts of geological caves is of course the Gouffre de Padirac! In a region honeycombed with caves, this one is a gem.
Its huge 103m sinkhole leads down to an underground river where visitors can jump in a flat bottom boat punted by a guide and travel further into the chasm's labyrinth of stunning formations. Turquoise lakes, immense chambers and stalactites/stalagmites all over the joint. 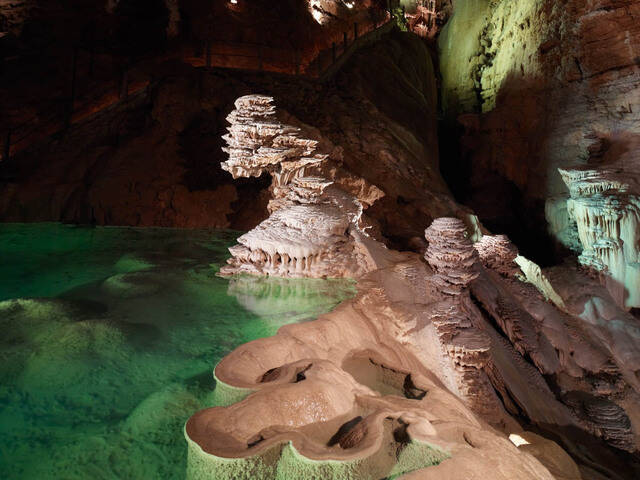 Just a few pointers to get you started:

Try to buy your tickets in advance and avoid the sometimes long entrance queues.
Make sure you let the boatmen and walking guides know if you don't speak French as most will happily translate their expert knowledge into English.
And last before least, no photographs can be taken inside so remember to keep the leaflet if you're planning on giving the traditional holiday snaps presentation to the family when you get home. 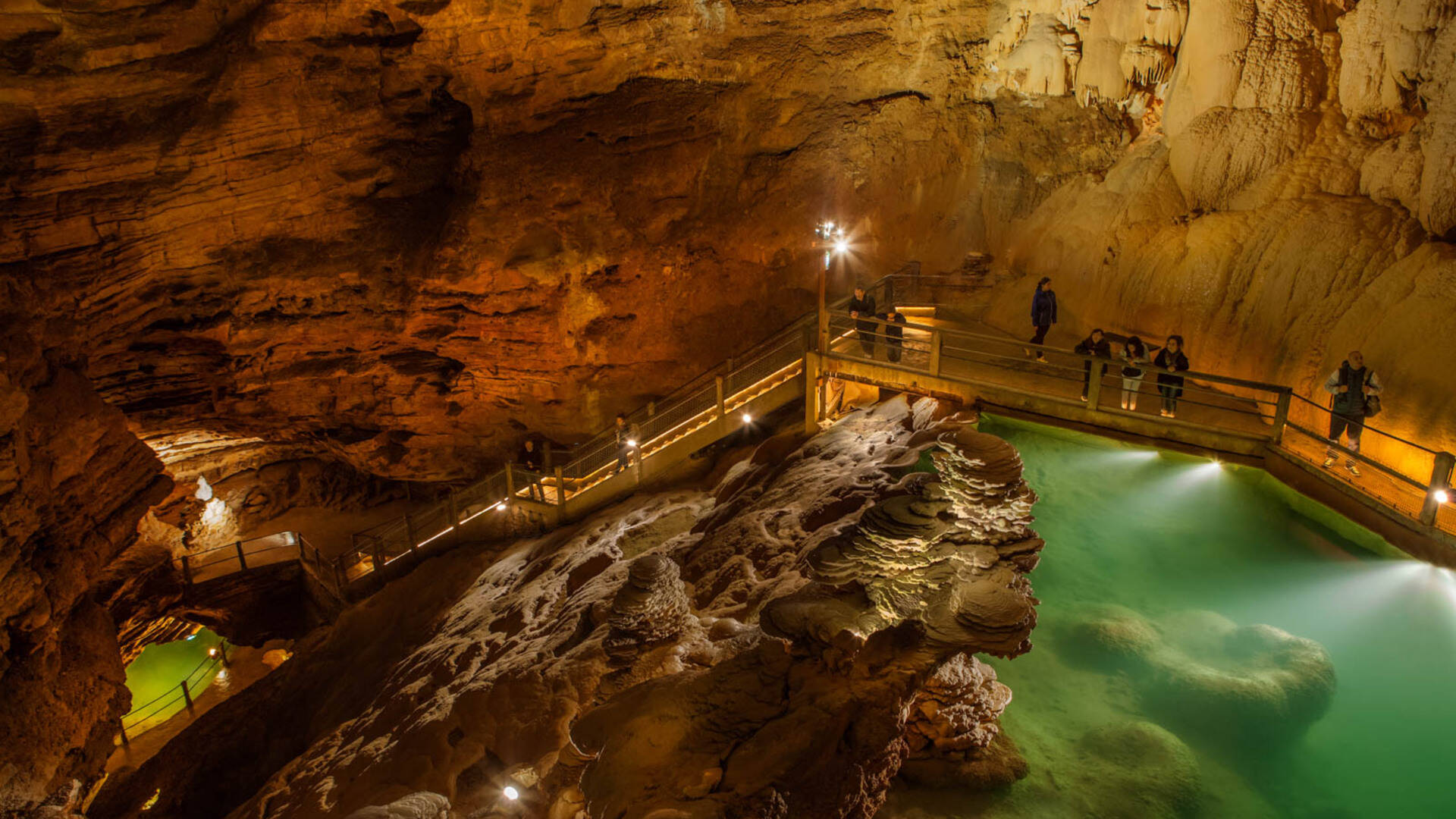 Visit of the Padirac chasm

Discovered in 1940 by 4 school boys, the multi-chambered cave of Lascaux contains some of the most terrific examples of Paleolithic art in Europe.

Boasting 2,200 representations, many of the major artworks were painted onto the walls using mineral pigments or incised into the stone.
An encyclopedia of the Dordogne's prehistoric wildlife, over 900 animals including deer, bulls, ibex and cattle feature in the caves, but only one bird-headed human and no flowers, trees or countryside.

The Hall of Bulls is amongst the most densely illustrated chambers and extends uninterrupted for 30m along both sides (you can't miss it). Dubbed the 'Sistine Chapel of Prehistory', it's fair to say that no other cave paintings can compete with those of Lascaux's in terms of colour, size, quality and quantity. 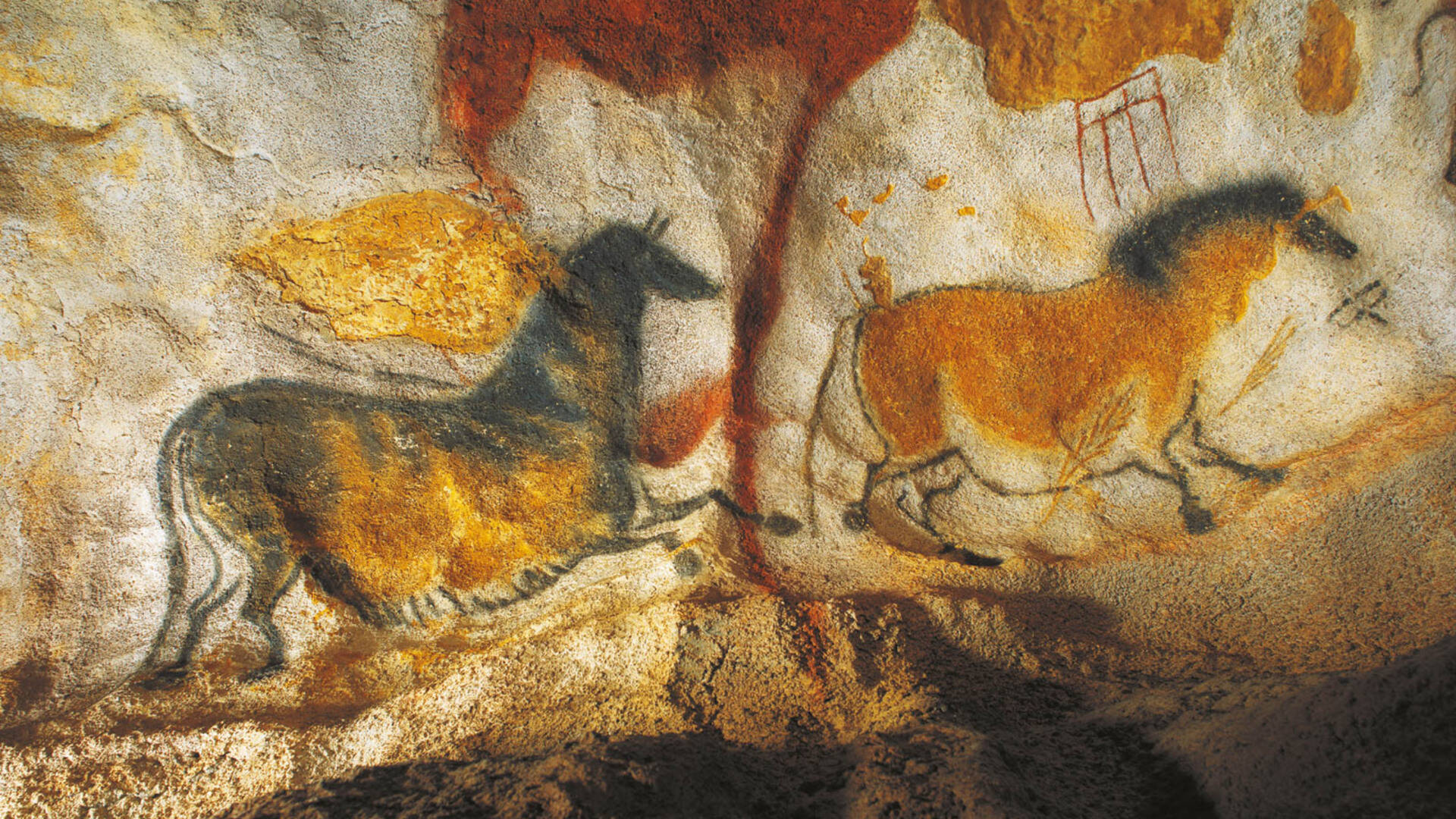 Open for visits until 1963, the original was forced to close its doors to prevent the paintings from deteriorating with the circulating air. So in order to satisfy the public's curiosity, Lascaux 2 set up shop next door and meticulously re-created 80% of the images. 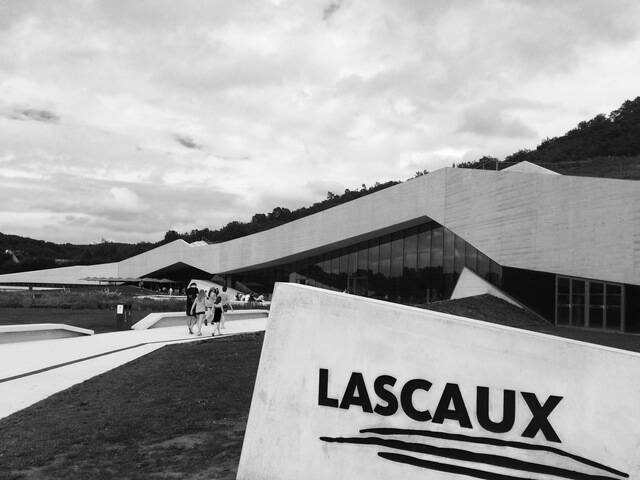 However concerns that its numerous passing visitors would harm the original cave meant that the first replica would be superseded by its high-tech sister: Enter Lascaux 4.
This newest member of the family boasts a complete replica of France’s most celebrated cave art but with a 21st century twist: Interactive guides and multi-screen displays.
With the help of the latest technology and expert guides, visitors can work their way in and out of the workshops and exhibitions easily.

For Lascaux 4 to achieve this perfect carbon copy, a team of 50 expert artists used digital photography and laser imaging to reproduce the paintings stroke-for-stroke. The temperature, air pressure, dampness and sounds are also identical to the original.

Word of advice: Don't feel put off by the idea of visiting a 'copy', Lascaux 4 is guaranteed to give even the smallest of kids the goosebumps.

Buried in the Dordogne Valley's rolling countryside and encircled by a trilogy of stunning villages, Autoire, Loubressac and Saint Céré, the Grottes de Presque is the ideal place to take a breather from a hot afternoon of village hopping.

Draped with curtains of limestone and decorated with some rather bulky stalagmite pillars, this hillside cave is the proud owner of the tallest stalagmite in Europe measuring a whopping 30ft from floor to vault.

Rocamadour is not only home to the Black Madonna but also to an underground world of stalacite-decked caves with calcified pillars and original Paleolithic drawings of horses and deer that date back to 20,000 B.C.

The pre-historic artists created the paintings by airbrushing red and black pigment onto the rocks using animal bones and a variety of different stencils like hands.

The cave is easily accessible with only a short walk down some steps.

Renowed for its interesting mix of tapering concretions and incredible prehistoric paintings, the Grottes de Cougnac is proof that the Dordogne is as beautiful below as it is above.

This underground wonder features some of France's oldest artwork still open to the public with 60 diagrams of mammoths, goats, deer and other animals as well as rare sketches of human figures. 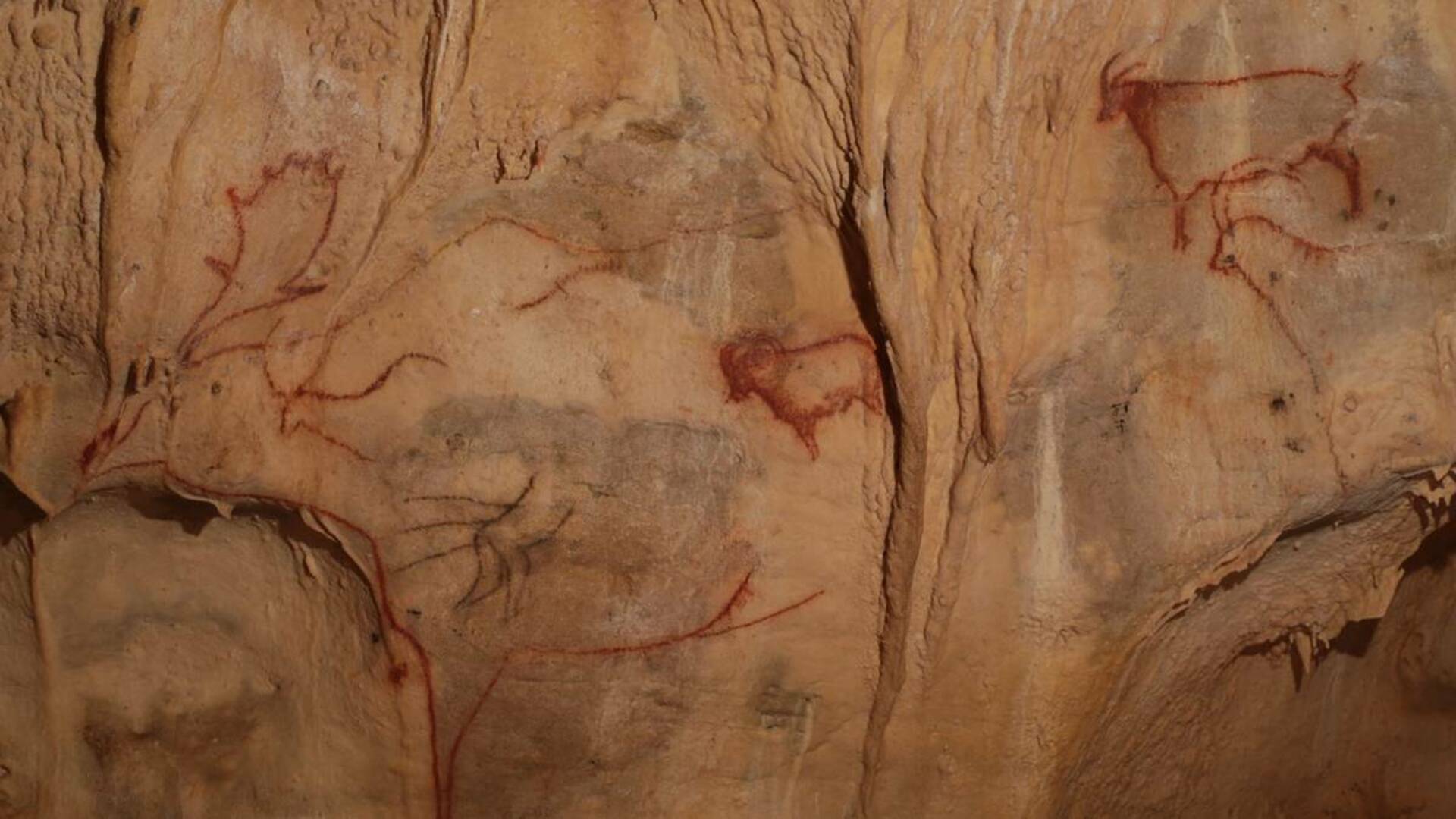 Prehistoric paintings in the caves of Cougnac

Archaeological hotspot and 'World Capital of the Prehistoric Times' if you please, the village of Les Eyzies offers visitors a chance to discover the Dordogne Valley's major Upper Paleolithic sites.
Its extensive series of dwellings teams with prehistoric treasures like the animal drawings in Font-de-Gaume, the engravings in Les Combarelles, the sculptures in Cap-Blanc or Le Poisson the incredible display of stalactites and stalagmites in the Grand Roc...
And if these weren't enough, a trip to the Château de Commarque's troglodyte caves or the National Prehistory Museum to check out some of the Dordogne's major archaeological finds should do the trick.

First inhabited 17,000 years ago by semi-nomadic hunter gatherers, La Madeleine was only awarded a troglodyte village with stone walls and 3 different levels in the Middle Ages: A lower for live stock, a middle for villagers and the medieval castle for the cherry on the top.
Inhabited until the end of the 19th century, the 15th century Gothic chapel and its beautifully preserved vaults and stained-glass windows are a joy to the eye.
Visitors can munch on a sandwich in the picnic area and take in the magnificent views over the valley or rent a canoe nearby and paddle past this tremendously gorgeous site. 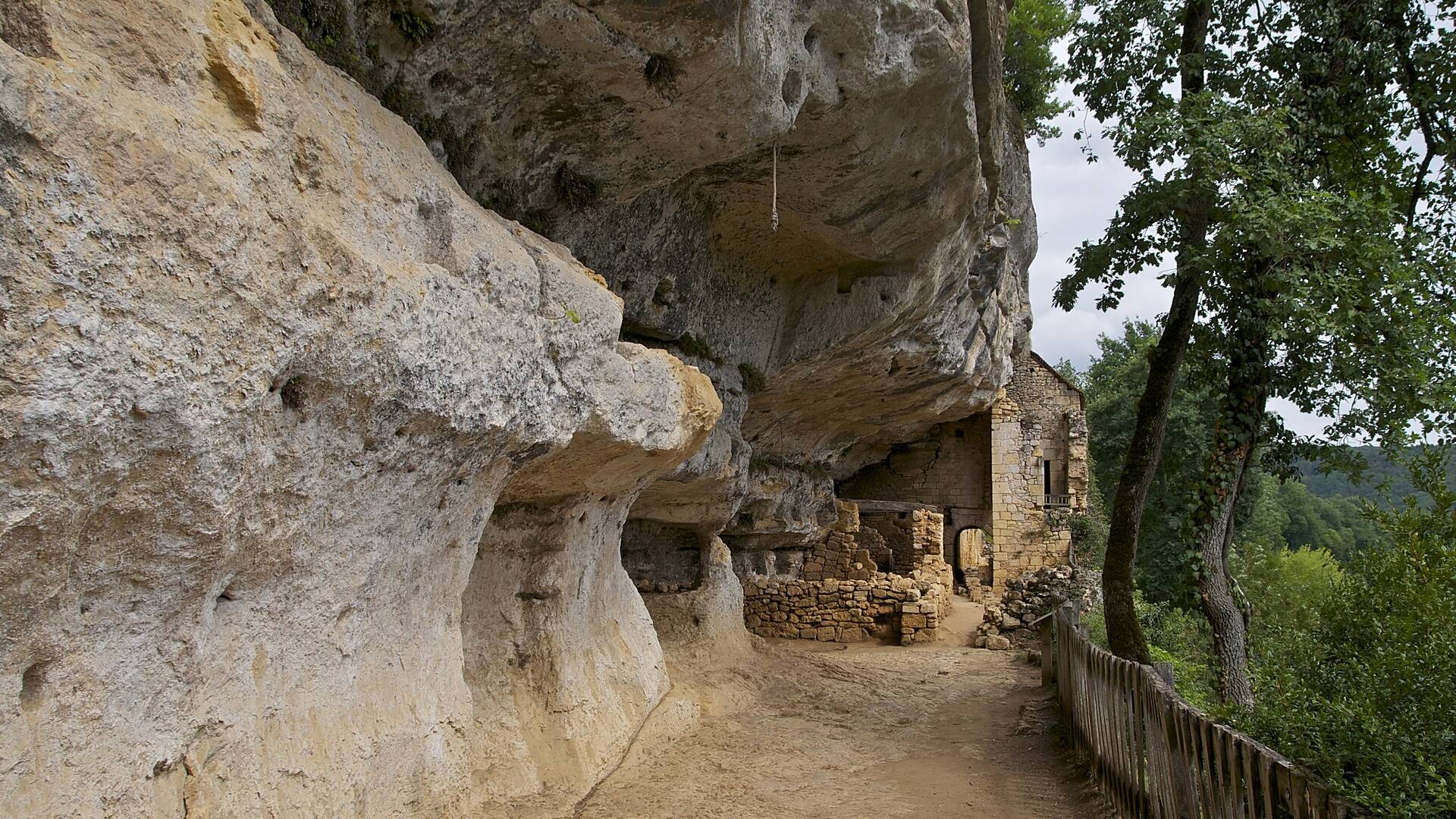 What is 3,281 feet long, 262 high, 55,000 years old and the biggest cave dwelling in Europe?
La Roque-Saint-Christophe of course!
Situated on the south bank of the Vézère River, this large prehistoric complex boasts five different levels and 100 troglodyte houses used to shelter up to a thousand people between the 6th and 16th centuries.
These water eroded cavities where inhabited by Neanderthal men and by the Middle Ages were later developed into a village with numerous fortifications and half-timbered buildings.
Although the Hundred Years' War saw the better of these rock shelters, remains of steps and passages linking the buildings as well stone hooks to tether animals help visitors to imagine what life was like in this thriving medieval cliff-side town. The great monolithic staircase leading to the top terrace and the replica winches and cranes recreated in honour of La Roque Saint-Christophe's pioneering medieval builders are two of the key sights.

Once you've finished up in La Roque Saint-Christophe, drive a couple of minutes upstream to the Pas du Miroir or Reflection Rock, a viewpoint on the ledge of a cliff where the calm water flowing underneath is renownedly silky and reflective compared to the rest of the river. This little stop off is great for early risers before the breeze picks up. 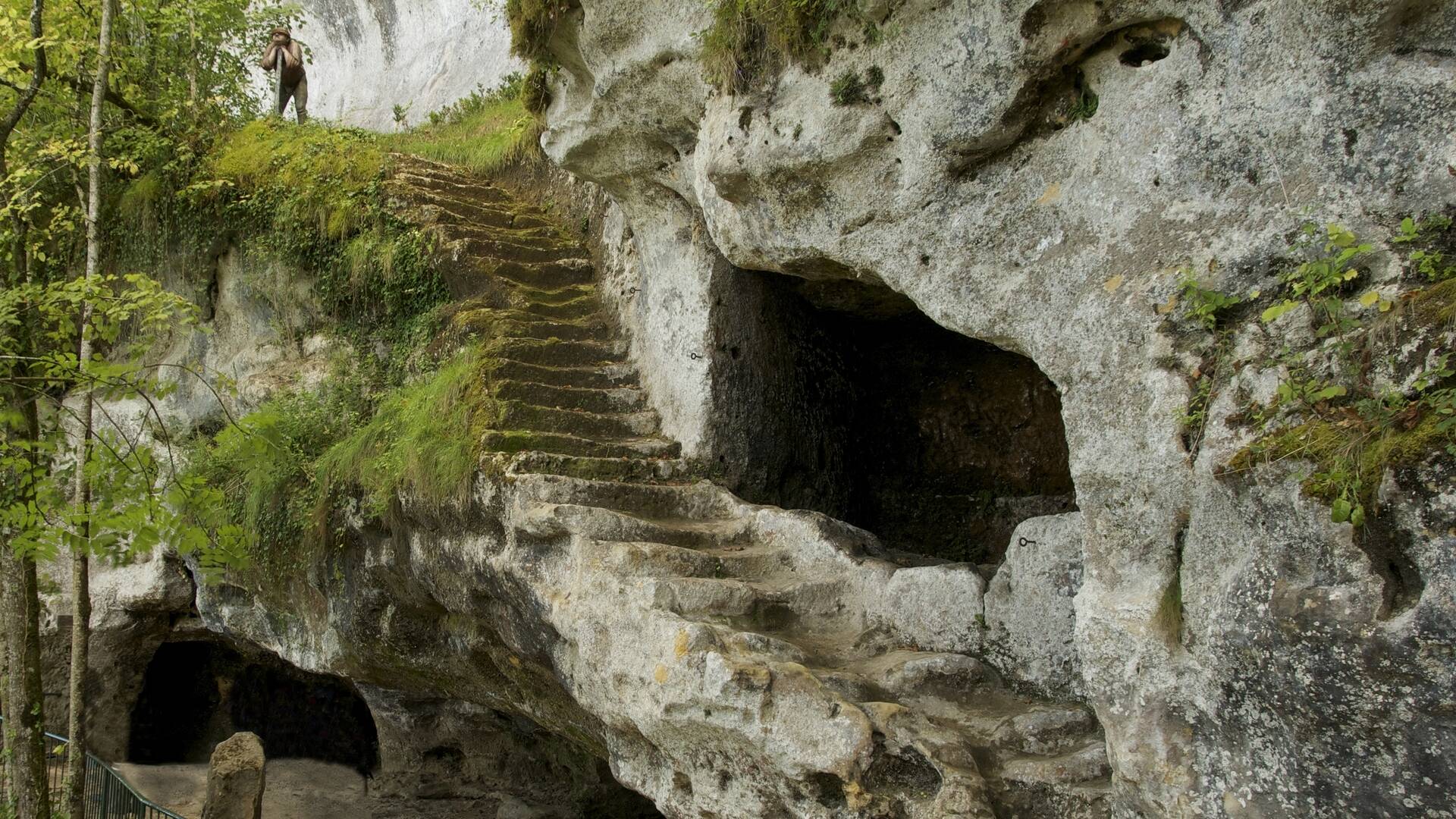 Boasting one of most extensive cave systems in the Dordogne Valley, Rouffignac (or the Cave of the Hundred Mammoths,) is made up of an 8 kilometre long network of underground galleries spread over three different levels.

Some of these motorway-sized passages measure up to 10 metres high and a 12 wide and are significantly larger than others in the region.
Cave bears were most probably the cave's first inhabitants as countless claw marks on the walls and ceilings as well as lairs in the clayey ground can still be seen today.
A guided train ride takes visitors through the galleries to discover the 250 prehistoric drawings and engravings of mammoths, bison, ibex and woolly rhinoceros that date back 13,000 years.

Going through the Natural Regional Park to the valley of the Célé river near Cahors, la Grotte du Pech Merle is an unmissable visit for all cave paintings amateurs. These outstanding works of art are the original masterpieces dating back over 20 000 years.
The famous horses with spots, mammoths, bisons have been preserved across the millennia along with mysterious series of dots…
As you will be seeing the original drawings, special care needs to be taken to preserve them. It is highly recommended to pre-book your visit as only a limited number of people are allowed in each day.

Just a stone's throw from Turenne, visitors can journey down the ferny cavity of the Gouffre de la Fage to explore its underground abyss of calcified columns and draperies.

Although the cave is relatively smaller than others in the Dordogne Valley, its complex calcite formations, palaeontological heritage, kids excavation workshops and mini caving expeditions largely compensate for its more modest size.
The cave is also home to one of the most important bat colonies in Europe which can be seen at certain times of the year.

Used by monks to worship in the 8th century, Brantôme's original Benedictine monastery was settled in the cave dwellings and were left with remarkable carvings of The Last Judgement. Although perhaps not as 'prehistoric' as other of the Dordogne's marvels, the remains of the troglodyte abbey make a fascinating trip especially during the night-time visits.

Please note: Most of the caves in the Dordogne Valley can get a bit nippy (around 14°c) so remember to bring a wooly as well as sensible footwear as some paths may be slippery. Entrance tickets to the Lacave, Presque and Cougnac Caves are also sold in the offices of the Dordogne Valley Tourist Office.

Lascaux : Discover for yourself one of the world’s most important sites for Palaeolithic art.

The Gouffre de Padirac : Descend into the earth to explore one of the largest chasms and cave systems in Europe, take a boat ride on an underground river – An amazing experience.

Carbonnières : A newly-open cave with an underground waterfall, located within a dinosaur park…

The caves of Lacave in the Dordogne Valley feature impressive limestone cave formations and natural underground rock pools. To see it you also need to ride an underground electric train. Definitely one for all the family.