An astonishing cave formed over 1000s of years

Discovered in the early 2000s this cave system has remained hidden from view until it was only recently developed and opened in 2018. Despite its recent arrival on the cave circuit its already making a big splash.

Your trip will take you beneath the Causses du Quercy Regional Nature Park into a cave system 350 metres long with six large caverns carved out of the limestone rock by thousands of years of water erosion. As the water has passed through this rock, calcite mineral deposits have been left behind growing into a diverse array of stalactites and impressive unique formations.  You can still see the crack in a stalagmite caused by gigantic volcanic eruptions in France, thousands of years ago. 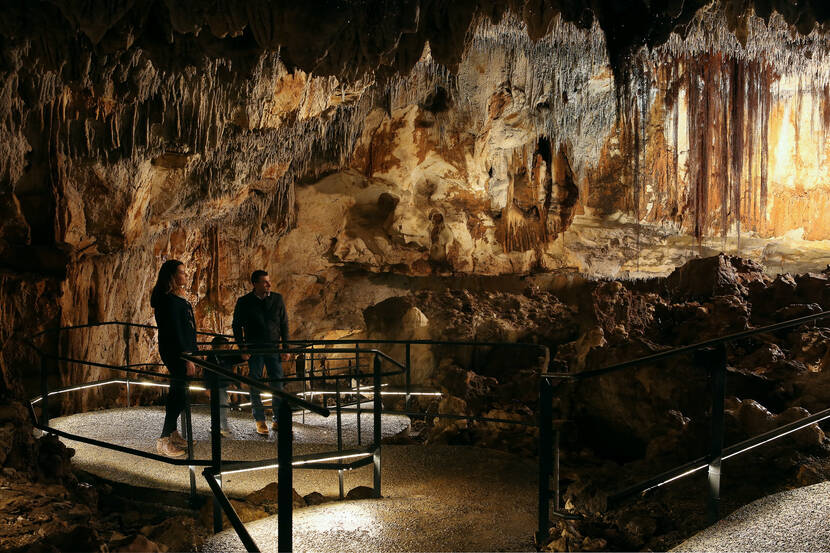 The sound of silence

Taking advantage of new technology, the cave is beautifully lit employing the latest in LED advances that make the cave seem almost extra-terrestrial, like an alien environment from another time.

What strikes you immediately when you start your visit is that the first section of the cave seems to shimmer as so many of the stalactites  glisten and gleam in the light, hanging down like Christmas tinsel from the low ceiling of the cave. There is a constant sound of water penetrating and percolating through the cave and low level ambient music plays throughout your guided visit.

These initially low ceilings give way to much larger caverns, with huge formations, one resembling a giant octopus and another containing an underground waterfall. At one point a stalagmite and stalactite meet forming what resembles a totem pole. The final cavern space gives over to a short light show with accompanying filmic music. Elements of the rock formations are lit up as if illuminating the solo of an orchestral player, synchronised to the music. On your return back, you are shown various weird stalactites that have grown into odd shapes, known technically as ‘eccentrics’. All in all, this relative newcomer is a very welcome addition to the other longstanding caves  of the Dordogne Valley and a fun and interesting visit for all of the family. 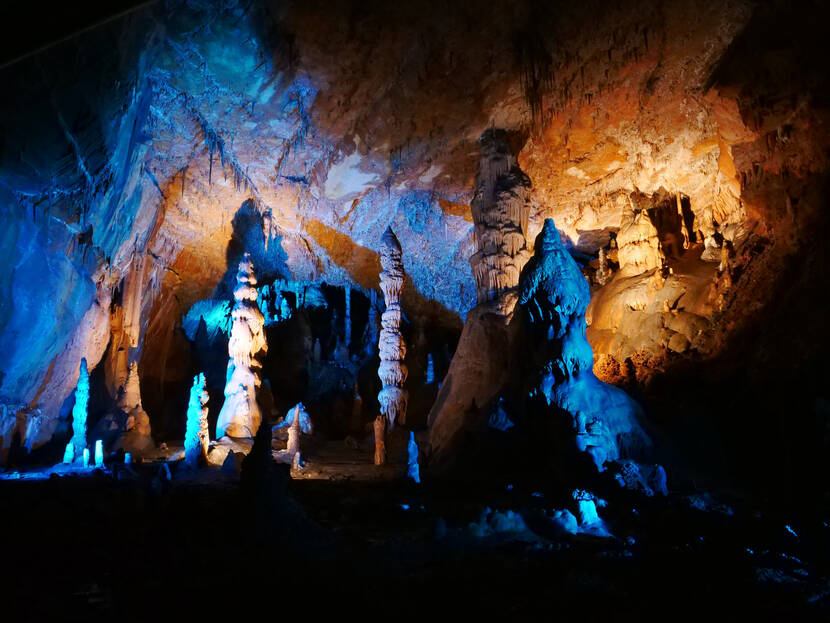 To access the cave, you have to traverse a section of a  Dinosaur park, in which the Grotte de Carbonnières is housed. It’s about a 15 minute walk through the park and you will pass by some dinosaur exhibits and a moving T-rex, full of ambient sounds of a dinosaur world.  If you have small kids with you this may prompt some of them to ask to visit the rest of the Dinosaur park. There is a reduced price ticket option combining visits to both the cave and dinosaur park.

Reduced Mobility Friendly!
This is the most friendly reduced mobility cave in the Dordogne Valley. There are absolutely no steps and a ramped path extends throughout the cave which is almost entirely flat with only modest inclines. The only caveat is that you have to walk a good 15 minutes along a slightly hilly path that whilst completely wheelchair accessible may be hard work at times.

Every day from April to November