The City of 25 Towers

From its berry red walls and torrent of flowers to its rich heritage, Collonges-la-Rouge promises a ‘Kodak moment’ in every corner. A must-see village in the heart of the Dordogne Valley.

One of the "Most Beautiful Villages in France"

Not only does Collonges-la-Rouge proudly proclaim the status as one of 'The Most Beautiful Villages in France', it's also the founder of the association.
Despite inhabitants putting down roots as early as the 8th century, the village became a stronghold of the Counts of Turenne by the 14th century and one of the largest fiefdoms in France.
Collonges's hallmark is undoubtedly its blazing red buildings (hence the name) built with sandstone rich in iron oxide, unusual for other areas in France but characteristic of parts of the region.
Visitors can enjoy a stroll along the narrow alleyways fringed with these flamboyant medieval gems and draped with either clusters of grapes, lashings of wisteria or crowned with an elaborate tower.

With no less than 25 turrets peaking up amidst the meadows and chestnut and walnut orchards, the village successfully conjures the image of quintessential France. Beneath its lauzé roofs lay impressive manors and modest cottages as well as a beautiful church and a covered market.
Collonges-la-Rouge counts many impressive 15th and 16th century houses such as Ramade de Friac with its two watchtowers and Maison de la Sirène with its vaulted porch, period interior and mermaid sculpture. Visitors can continue to potter around the village and discover more architectural treasures like Château de Vassinhac Castle with its elegant mullioned windows or Château de Benge with its machicolation remains and beautiful Renaissance window.

The remarkable St. Peter's Church boasts a splendid limestone typanum that contrasts with its walls of red sandstone as well as an imposing gabled Romanesque steeple. Dating back to the 11th century and developed up until the 15th, this church is notable for its two naves where both Protestants and Catholics would conduct services simultaneously.
Just along from the church is the Chapelle des Pénitents. The chapel is no longer in use but instead houses an excellent exhibition. Thanks to both the church and the chapel, Collonges-la-Rouge has and continues to be an important stop for thousands of pilgrims on their way to Santiago de Compostela. 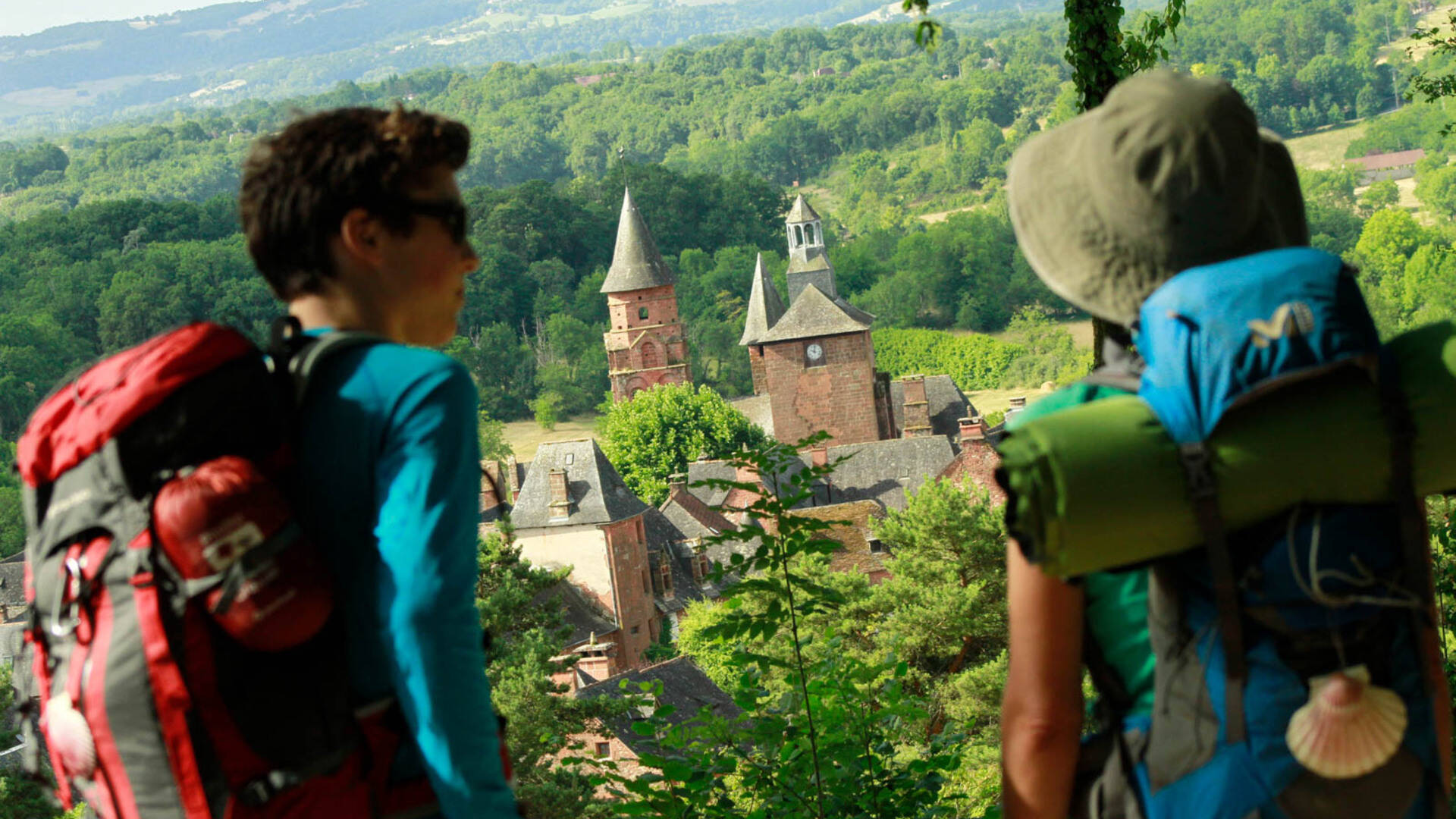 The village also offers a sprinkling of shops selling souvenirs so remember to make time for a bit of retail therapy. Tucked away in the houses, dozens of artisans sell quality goods like organic produce and locally made apéritifs, wines and liqueurs… And as the village prospered from its vineyards until the end of the 19th century, wine's something the area knows how to produce (and drink...)

If you're not in the mood for shopping, it shouldn't be a problem finding a nice spot to sip on a vin paillé or feast on a 'salade de gesiers' as there's plenty of cafés and restaurants. 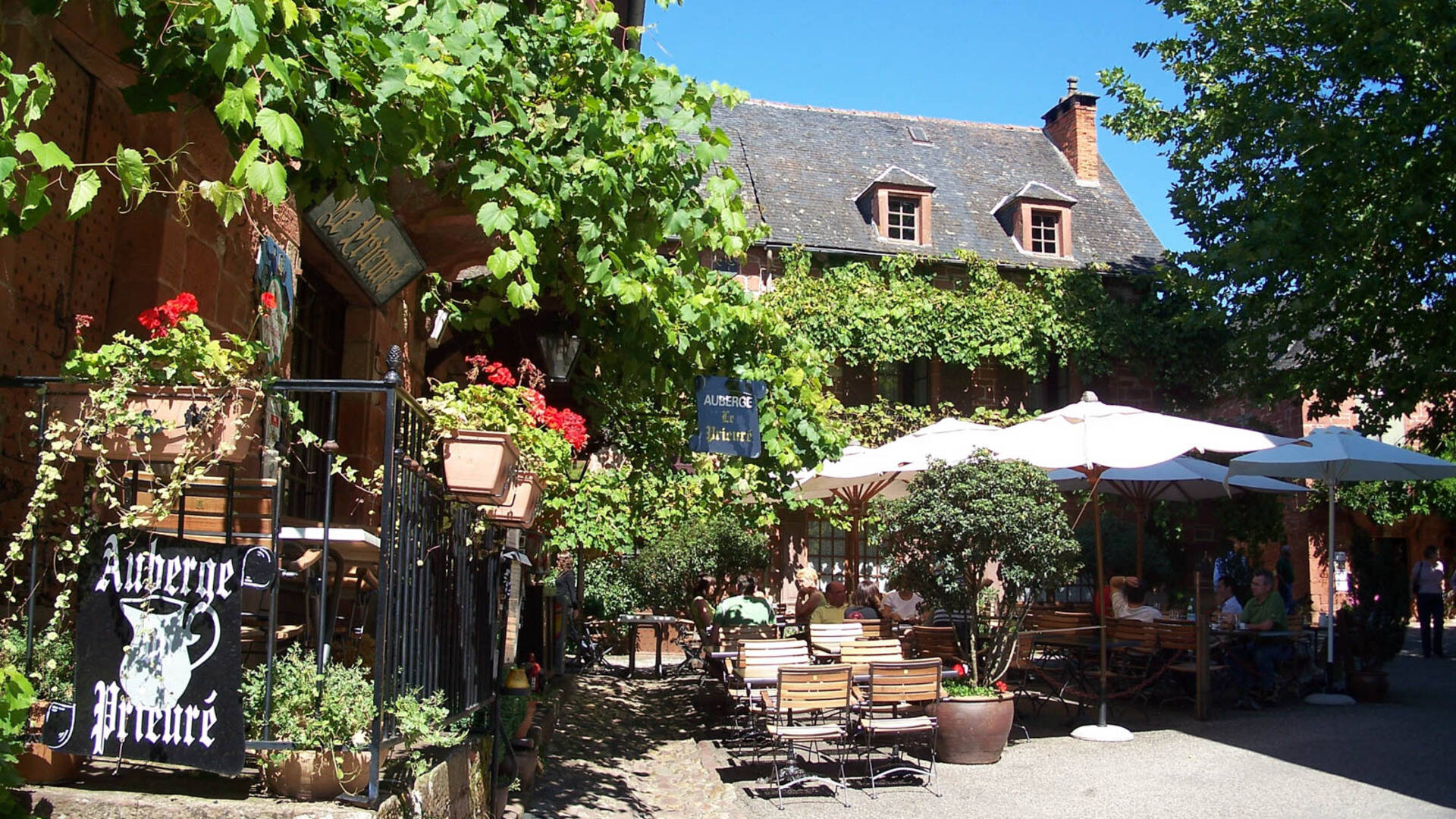 Every Tuesday in summer, the Place du Lavoir comes alive with the festival des Théâtrales de Collonges-la-Rouge and its open-air theatre performances.
Every first Sunday in August, the communal ovens used by villages to bake bread in the Middle Ages are fired up to celebrate 'La Fête du Pain'.

Before you leave to poke around the streets of Collonges, remember to call into the tourist office for a map. It will give you all the key sites to explore and a quick summary of each one's history.
A multimedia trail in English is also available here and will take you to 14 different stops in the village with the help of a tablet.
If you dabble in a bit of French, guided visits leave from the same place three times a day in peak season. The village also holds torchlit night tours at various dates throughout the summer.
The car park demands a small fee (but hey, what's 3 euros when you're having fun?)