The Village of Three

An authentic village perfect for visitors in search of a whimsical afternoon of farmer's markets, fresh countryside and lots of history...

Mid-way between Collonges-la-Rouge and Beaulieu-sur-Dordogne, the medieval village of Curemonte stretches out along a ridge overlooking the valleys of Sourdoire and Maumont.
Today, its fortified hilltop position offers beautiful views across the surrounding countryside, but in past times its location gave strategic importance to the area.
Qualified as one of the 'Most Beautiful Villages of France, the 'Village of Three' never fails to charm visitors with its three churches, three castles, three cavalries and three fountains.

Curemonte, the Village of Three

The three castles of Curemonte

In addition to the round and square towers of Curemonte's castles and 12 century Romanesque church, a half dozen medieval aristocratic houses adored with turrets and crests line the narrow streets alongside the old ramparts.
Some of these boast half-timbered fronts as well as ornate doorways and windows further adding to the charm of the village's side streets.
Curemonte developed around three castles (which must be something of a world record for a population of just 200).
The castles of Saint-Hilaire and des Plas are a joint lordship built in the same enclosure. Saint-Hilaire, located in the centre, was built in the 14th century. This rectangular three story building is flanked by three towers crowned with machicolations and topped with a flat tile roof. Château des Plas was built near the entrance and forms two round towers.
The third castle, Château de la Johannie, is found next to the market hall and shares striking similarities with Saint-Hilaire. Unfortunately, all are privately owned and closed to the public.

Curemonte also has three churches.
The Church of St. Bartholomew boasts a remarkable painted, wooden altarpiece and bell-gable with three bays. The beautiful Romanesque church of Saint-Hilaire de la Combe is one of the oldest in the Dordogne Valley and the Church of Saint-Genest is now a museum for religious art.
The 19th corn exchange and blacksmith stall as well as the Maison Perne and its contemporary garden also add to the ore of this quaint medieval village. 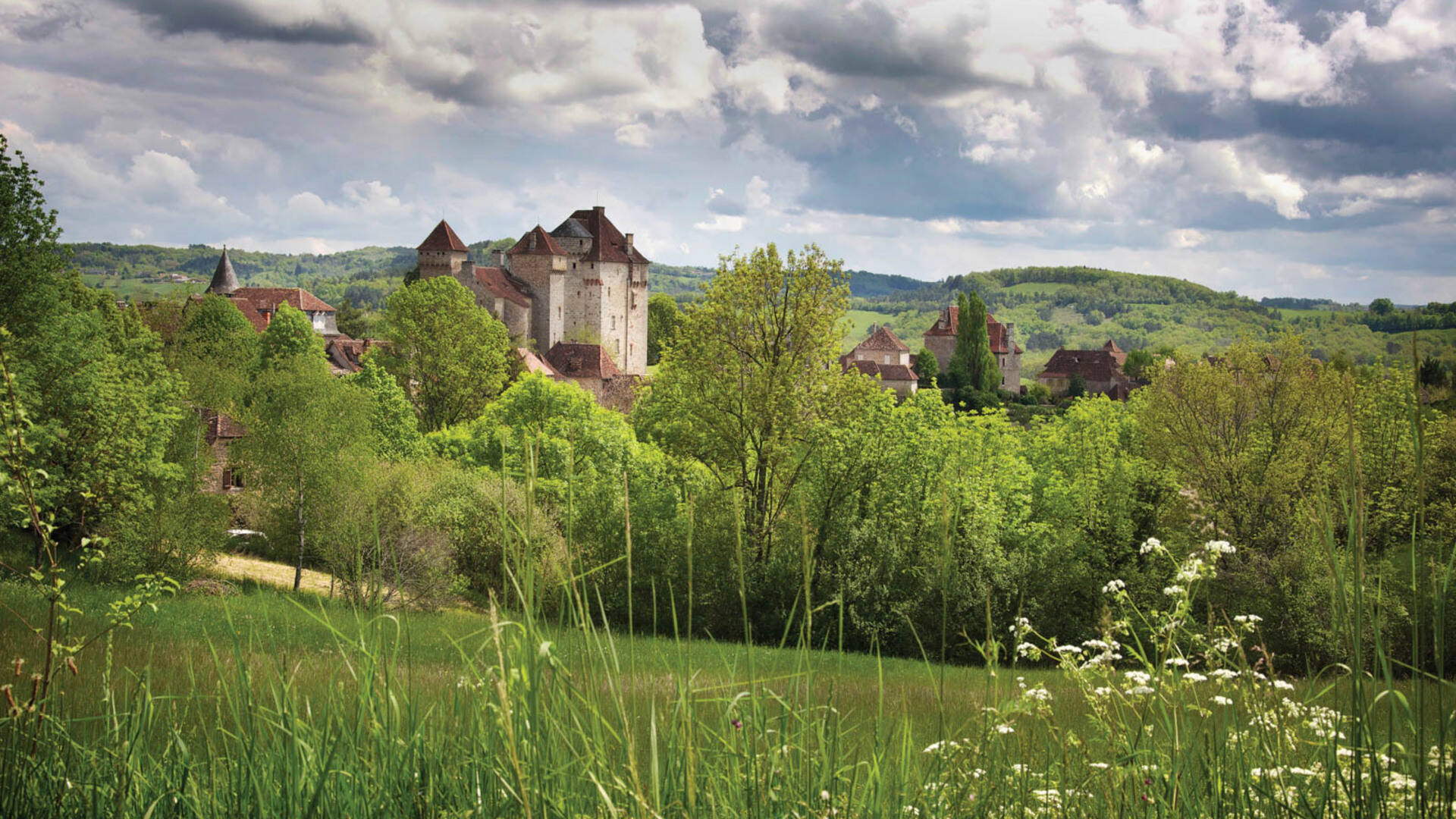 Dandelion liqueur and beer : two of many local delicacies

Boasting a handful of gift shops, cafés and local producers, visitors can make their way to Lou Pé de Grill farm where wild dandelions are harvested and fermented to create excruciatingly yummy liquors and jams. For those feeling thirsty, the Brasserie Corrèzienne offers a delicious range of local artisan beers.

In the heights of the village, be sure to stop at the orientation table and enjoy the wonderful views over the flat and conical roofs.
Curemonte is a walker's paradise with dozens of trails around its two valleys. If you want to get an eyeful of the site as a whole, the 4.5 mile long marked trail from the centre provides stunning views of the village and surrounding hills.

Guided tours for individuals and groups are available in peak season. A night market is held every Wednesday evening in summer with shared tables and barbecues available.

Curemonte will be celebrating Bastille Day generally with an open-air meal and ball as well as the annual Journée du Patrimoine in September where the castle gardens will be exceptionally opening its doors to the public.